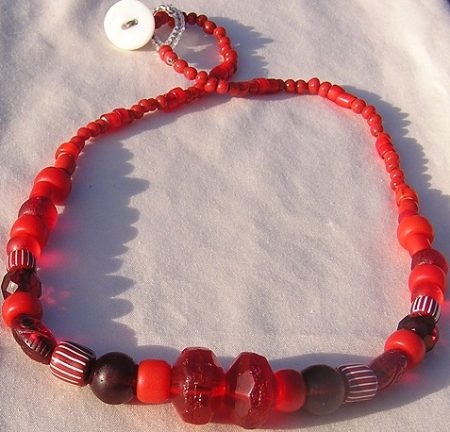 Crazy ’bout them Reds – Trade Bead Necklace by Janet Walker at Walker Goldsmiths is a show stopper.  I’ve been making this stunner for a couple of years now and it never fails to please.  Something about those Reds, alright!  Guaranteed to cheer up anyone, especially welcome on a cloudy day, and a great addition to a work-a-day wardrobe.

These Antique Trade Beads all date to pre-1850’s.  The little red Czechs are newer but the main beauties are steeped in history.  The two Pressed Venetian Monochromes are ancient red glass beads made with the earliest technique for shaping glass beads; a pretty direct technique of pressing hot glass in a metal mold that requires a pin pressed down in the center to create the hole.  The beads are knocked out of the mold then tumbled and shaken to break off any spurs.  You can see the edges are rough and that indicates early mold techniques.  Sometimes the beads are tumbled with high heat to “polish” them and that takes off some of the roughness, but the edges do indicate their age.

Lots of opaque Red Padres in this necklace too.  The colors of red, white and sky blue were the most desirable of the glass Padre beads offered by Traders to the SW American Natives.  I can understand that because of their solid beauty.  They are all individually made by winding hot glass around a wire.  This technique really gives them all a one-of-a-kind appearance if you look closely.  I really like Padres because of the technique which makes them seem to have a soul.  The makers of festival clothing and jewelry knew that these Padres would bring elegance to their creations.

The name of those striped red and white glass beads is Dutch Gooseberries, really!  They’re originally made in Amsterdam from the 1400’s on in colors of pale greenish yellow, reds and blues all with the white added stripes.  If you’ve ever seen a real Gooseberry they do have a series of stripes all around them, are pretty translucent in the pale colors, but as they ripen from whitish green to red to blue you may see the resemblance.  I know it’s a stretch!

The largest Cranberry colored glass beads are called just that, Cranberries.  They’re interesting because not only are they very old, dating back to the 1500’s, but they were made when red glass was colored with Gold Chloride by the Venetians.  It turned out to be so expensive to do it that way that they started coating other colors like green or white glass with a thin coat of red to keep the cost down and be more saleable.  The faceted red glass beads are Venetian made also.

The birth of the Hudson’s Bay White Hearts come in here.  These are the red glass beads with the white interiors that were in such demand by the North American Natives and the African tribes.  These beads were made in so many sizes; from teeny seed size to very large, from cranberry color to bright red.  There’s also some beautiful Red Coral beads in this necklace and a couple of ancient Venetian Red Pressed Glass beads. 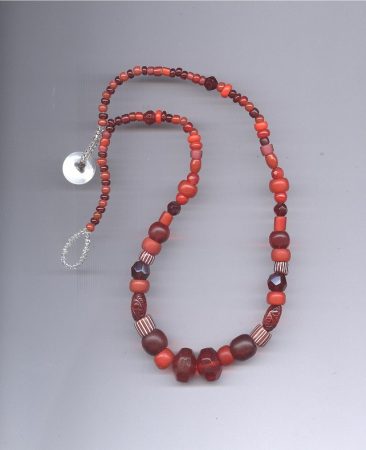