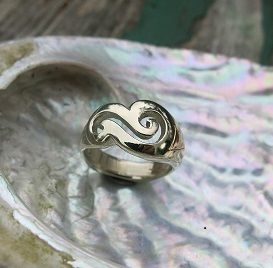 When Leslie got in contact with us at Walker Goldsmiths to create a Custom Pounamu Wedding Ring for her fiance’ we were excited to create something different than we usually get to make. Leslie told us, “I knew from the beginning that I wanted a very special ring for David to match what an amazing person he is. David had met the Walkers while serving a mission in Washington State, so having them make his wedding band would be meaningful to him because it would be made with love.”

David is part Maori from New Zealand and the Pounamu was the symbol that Leslie wanted for David as he had given one to her. A Pounamu is a spiral wave “Koru” symbol said to have derived from the unfurling fern frond seen on New Zealand’s silver ferns. The spiral Koru depicts new beginnings, new life, growth and harmony, also the promise of a meaningful relationship. Korus and spirals are found in the art of many cultures around the world and each of these cultures understands their significance and meaning differently. Leslie and David come from two different cultures and Leslie said, “It was very fitting because in each other we had found someone who brought new life to our souls.”

Leslie said she wanted to incorporate his Maori heritage and wanting something unique and special said, “I decided on the twist, representing the bonding of two lives together for eternity, and a journey of life, love, and friendship. It also signified the joining of two cultures or tribes, and of connection with the spiritual world… I knew that it was what I wanted for David; where he came from and who he is. It represented his pounamu- a symbol of being bound forever- and was especially significant because we were being sealed in the House of the Lord for eternity. We decided on a gold triangle inlay in the ring because it represents the marriage covenant that David and I made; a covenant between three people- David, myself, and God, then as we grow closer to God we would grow closer together as husband and wife.”

This is a wonderful Story Ring with so much meaning!  I carved the wax, checking with Leslie all along the way. We wanted to get it exactly right.  Owen lost wax cast it in 14kt white gold and inlaid the 14kt yellow gold triangle in the ring. Leslie was very smart and sent us a bunch of old jewelry to recycle to go towards the cost; important as they start out together on this new adventure.

Thank you, Leslie and David Campbell, for letting Walker Goldsmiths have a part in creating this special Custom Pounamu Wedding Ring. The meaning, history, story, future and the design are all exceptionally beautiful!