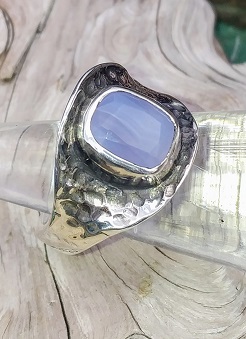 Walker Goldsmiths created this Ellensburg Blue Agate and Sterling Silver Ring for a young man to give to his Sweetheart.  The Agate is a 2.5 ct stone that lent itself well to bezel setting to show off the size and natural patterns in the stone.  Brady said that he “liked the idea of a chunkier ring with hammer marks” for the textured finish.  I wanted it to be very wearable and not interfere with finger movement so I tapered the shank somewhat and left it heavy enough to counterbalance the stone and top of the ring.  He liked it!

Information about the Ellensburg Blue Agate stone can be found at this site.  “In the windswept rangelands northwest of Ellensburg, a sky-blue gem awaits the most patient and attentive seekers.  Ellensburg Blue Agates are endemic to the area, in that they cannot be found anywhere else in the world. They are a product of the 47-million-year-old Teanaway Basalt.”

Owen and I love to study and learn about the geology of Washington state and Ellensburg Blue Agates have been a favorite of ours since first seeing them.  There is really so much to learn about the geology of the earth and now your Sweetheart has a bit of treasure!  Thank you, Brady, for letting Walker Goldsmiths make this Ellensburg Blue Agate Ring for for you. 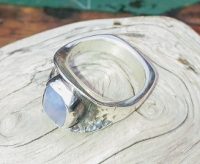