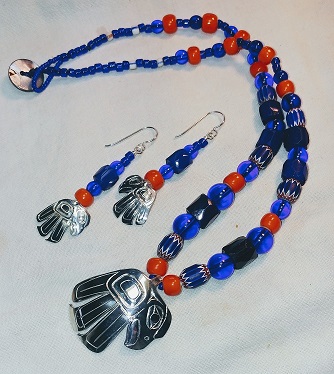 Walker Goldsmiths was called upon to make a custom Handcarved Sterling Silver Eagles with Trade Beads Necklace for a friend of our friend, Monica Decker, at Crazy Wolf Gallery in Ketchikan, AK.  Monica wanted to know if Owen was willing to carve these 1 inch Sterling Eagles for earrings. and I said, yes!!!  Well, Owen did too, but they’re awfully small for carving for the guy who carves bracelets!  Owen did a wonderful job and they’re so beautiful.

The necklace was like one I’d done before that Monica’s friend loved; a pattern of Blue Russians, Chevrons, Hudson’s Bay White Hearts and Czech Cobalts.  I’ve got to say how much fun it is for me to create with these excellent carved pieces and these hugely historical, antique Trade Beads.

I’ve told the story of the Blue Russians before, but here’s the site page with the information about their history. The other beads of interest to Fur Trade enthusiasts is, of course, the Hudson’s Bay White Hearts, and here’s a big article about them.  Chevrons are one of the most incredible Trade Beads ever made.  They have 5, 6 or 9 layers of colored glass to create the pattern and are very labor intensive.  They were primarily purchased in Murano, Italy, or Bohemia in the 1600’s, traveled and traded into the south of North America by explorers, then north to the fur trade area of the continent.  Their beauty made them very desirable.  I find it so interesting to trace the paths of trade beads all around the world.

This legend went with this necklace;  Eagles are known to be powerful and organized, yet honest and kind.  Grandmother Eagle was once called upon to rescue the young fishermen if the village who were being hauled out to sea and drowned by a Sea Monster.  So Grandmother put on her feathers and danced up her Great Powers to save them all.  The Eagle Totem brings the ability to be much more powerful than one appears both physically and spiritually. Not bad, huh?