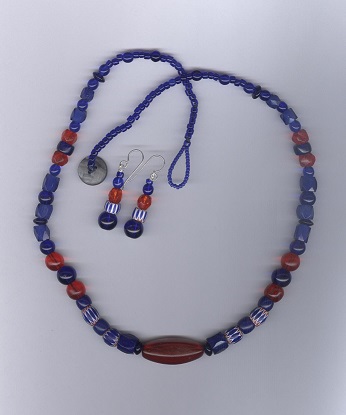 The center Venetian Red faceted bead is the fantastic centerpiece.  The interesting story about these ancient Red Venetian Glass beads, other than individually made and hand faceted by little cottage industries, is that they were originally made with glass colored with real gold chloride, of course, that made them very expensive.  The alchemists of the late 1600’s in Bohemia, especially one fellow named Kunckel, the son of a glass manufacturer, discovered the addition of gold chloride to clear glass made it turn this gorgeous red. The stories of intrigue and theft of secret recipes for glass during those centuries are really amazing!

Similar stories are rampant about the Hand faceted Cobalt Blues, later known as Russian Blues.  They weren’t made in Russia and are only called that because the Russian Fur Traders discovered the appeal they had for trade with the Inuit natives on the North Alaskan seacoast trading for Sea Otter pelts… more intrigue and theft with every other horrible coercive technique you can think of.  But the beads are so beautiful, and were traded by the natives among themselves and every other tribe on the Northwest Coast, then all across the continent with the North American Fur Trade.

The Chevrons have a wonderful history also. Chevrons are also known as “rosetta” beads, owing to the distinctive star-shaped design around the perforation hole. The first Chevron beads were made in Murano, Italy, in the late 15th century and were characterized by their unique rosetta or star design made by alternating layers of glass.  Chevron beads were made for trade throughout Africa as well as the Americas. 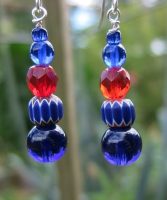 Trade Bead Elegance is one of the most formal looking necklaces Walker Goldsmiths makes that are steeped in history and color.  I love making jewelry with these wonderful bits of history. Every bead seems to have a soul or at least have touched one once upon a time.